The 2022 Itinerary of the Autogiro d’ Italia

Ostia- Aterni, Pescaria and nowadays Pescara, the city of Gabriele Mathonè and Gabriele D’Annunzio, the Neolithic city which boasts stories and remains dating from more than 6000 years ago. Vieste and the Gargano with a splendid coast full of beaches and marvellous sea caves. Pizzomunno, the Svevo Castel, the trabucchi and the coastal towers, Polignano a Mare whit its medieval suburb perched on the high and dipped cliffs that sees houses and lodges overhanging on the sea, and where the elegant promenade hosts the statue of Mister Volare, and again Marina di Ugento and the exquisite Mar Ionio whit its crystalline waters among the most beautiful of the Salento.

What to say about Matera and Campobasso, milestones in southern Italy?.   The first one whit it’s Sassi caves, and the crypt of the Peccato Originale, an oratory decorated with frescoes aged five hundred years before Giotto that makes it known as the Sistine Chapel of the parietal painting age, while the second, of longboards origins and maybe already existing in the VIII century, with its own defensive walls, was built on the remains of an older fortification. The Monforte Castel, the church of Saint George and Saint Bartolome, the boarding school Maria Pagano, the cathedral in Neoclassic and decorated whit valuables frescos of Amedeo Trivisonno and Romeo Musa, are a priceless testimony of history and culture.

All of this and more is how much can experience those who will take part in the Autogiro d’ Italia 2022; an edition which will magnify southern Italy with the Greek colonies that extend from Calabria to Sicily, from Campania to Puglia became the crib of the European civilization and not only.

An edition unmissable dedicated to only fifty crews and their cars.  A must edition because culture, history, art, and natural beauties have never been so close. 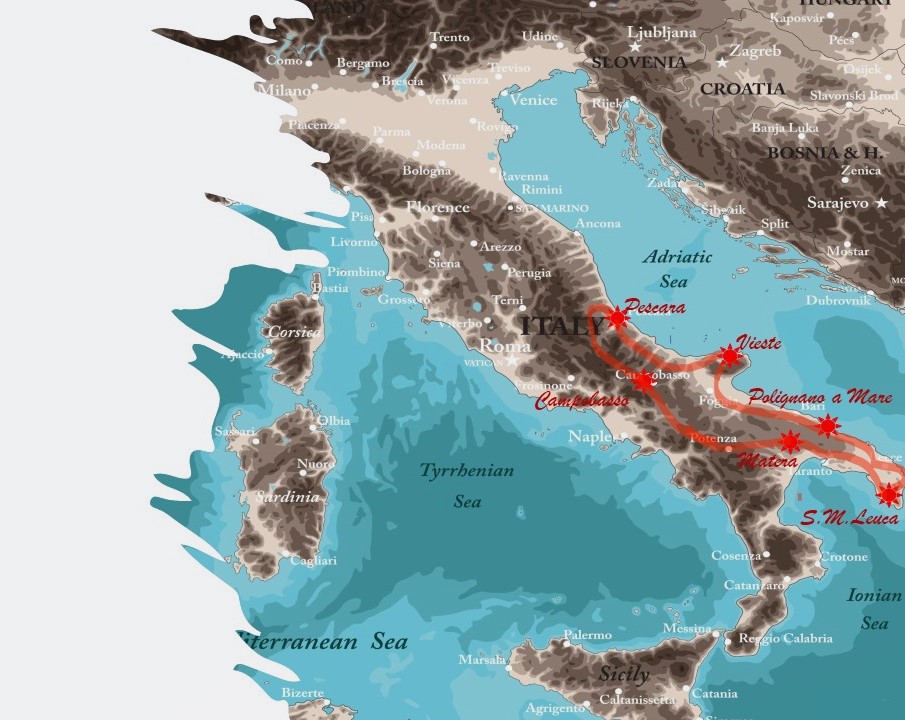 The stages of the Autogiro d’ Italia 2022 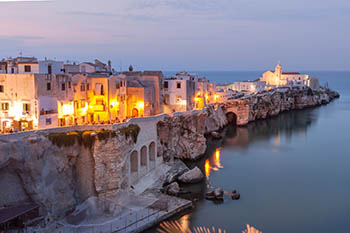 Pescara, on the shores of the Adriatic coast, will be the starting point of the Autogiro d’ Italia 2022. From there, coasting the sea we shall reach Vasto, a splendid city that overlooks the so-called “Golfo d’ Oro” along the coastline. Vasto has ancient origins and gathers the remains of thirty thousand years of civilization, evidenced by ancient towers, fortifications, castles, and churches. Our stage will lead us to the splendid Gargano, the “Sperone di Italia”, an unusual landscape made of wooded areas with lush pine forests, mountains, and a splendid coast full of white limestones cliffs, sea caves, and villages overlooking the sea.  Among them, one above all, Vieste, a coastal village facing the sea with an intricate labyrinth of alleyways that bring a square lookout with a marvelous view of the Mediterranean Sea. 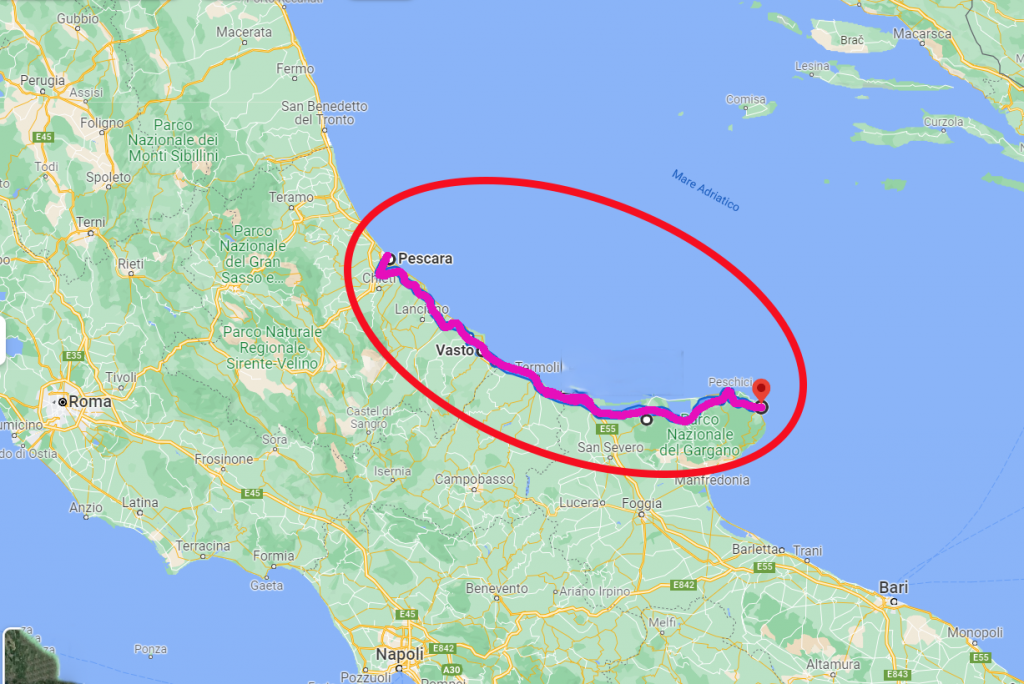 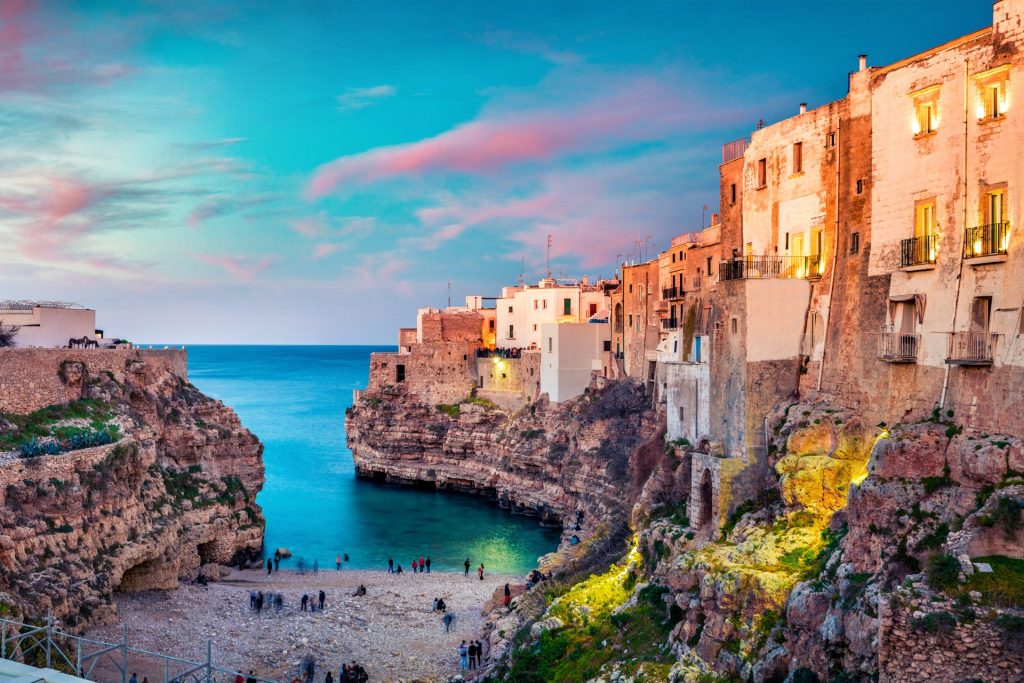 Polignano a Mare is widely known as “the pearl of the Adriatic coast”. A sublime blend between the crystalline sea and the cliffs of the antique borough that soars over stunning cliffs, where trulli and caves find their natural outcome to the sea. Polignano inspired Worldwide known Singer Dominico Modugno’s “Nel blu dipinto di blu”. The fascinating town center full of Arabic, Byzantines, Spanish and Norman traces, are only part of this fascinating stage which will visit many of the iconic places in the beautiful Salento. Monte Sant’Angelo in the beautiful Gargano, Trani and many others will be part of our trip to the very south of Italy. 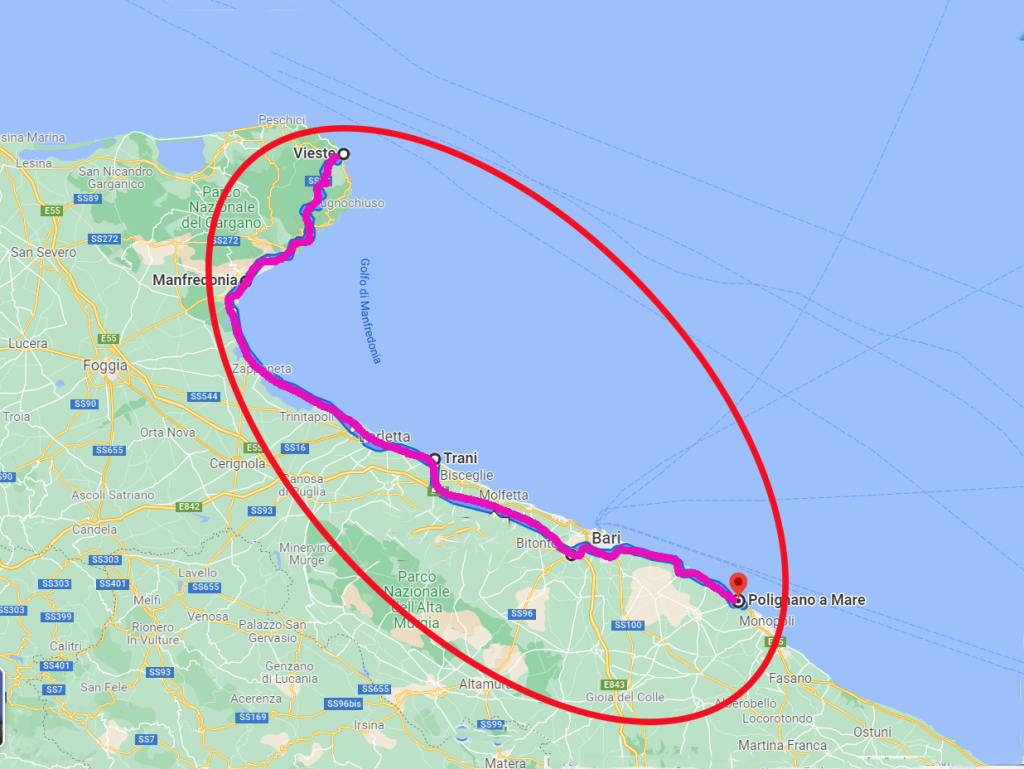 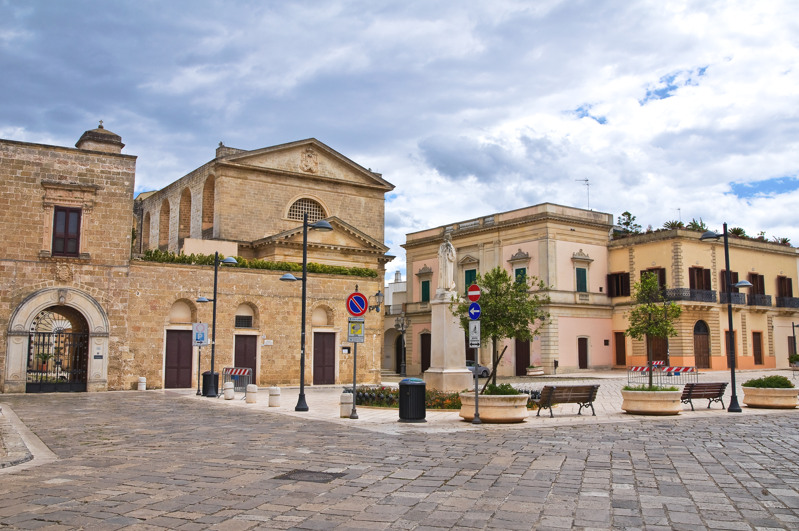 Located in the lower Salento in the province of Lecce, Ugento is the homeland of the mesopic population as many remains found in the city show that are dated in the VI century a.c. The city center shows a variety of styles including masterpieces of the gothic period.
Besides, the road will take us to Santa Maria di Leuca, famous for its iconic lighthouse. With its height of 47 meters, and position at 102 meters above sea level, is the second most important lighthouse in Italy, after Genova and marks the lowest point of Italy’s mainland. 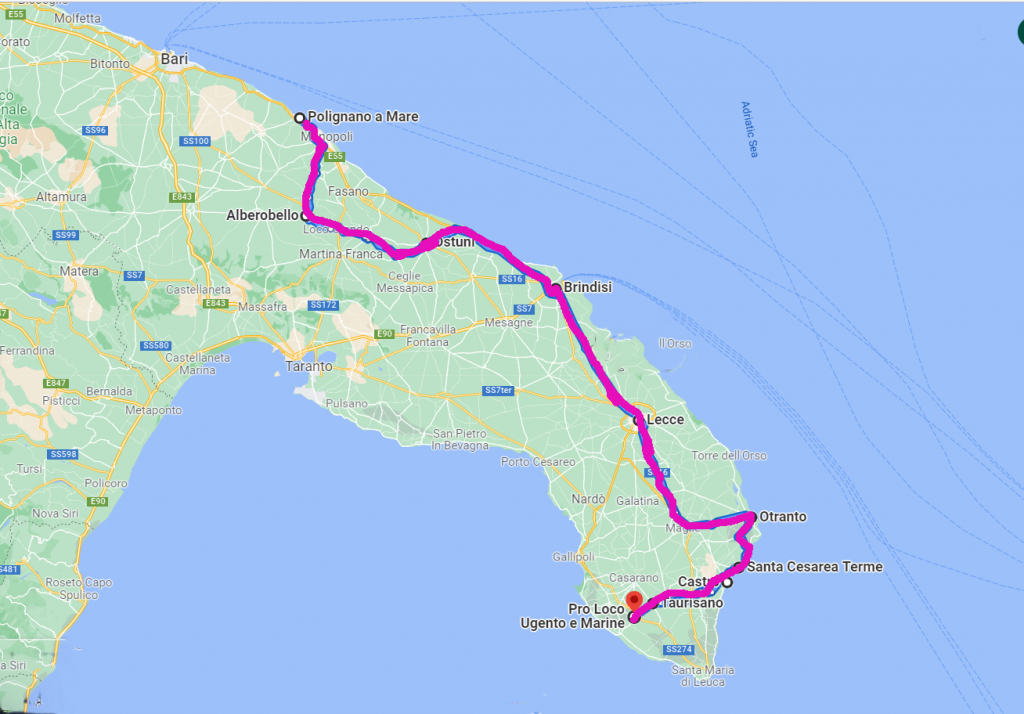 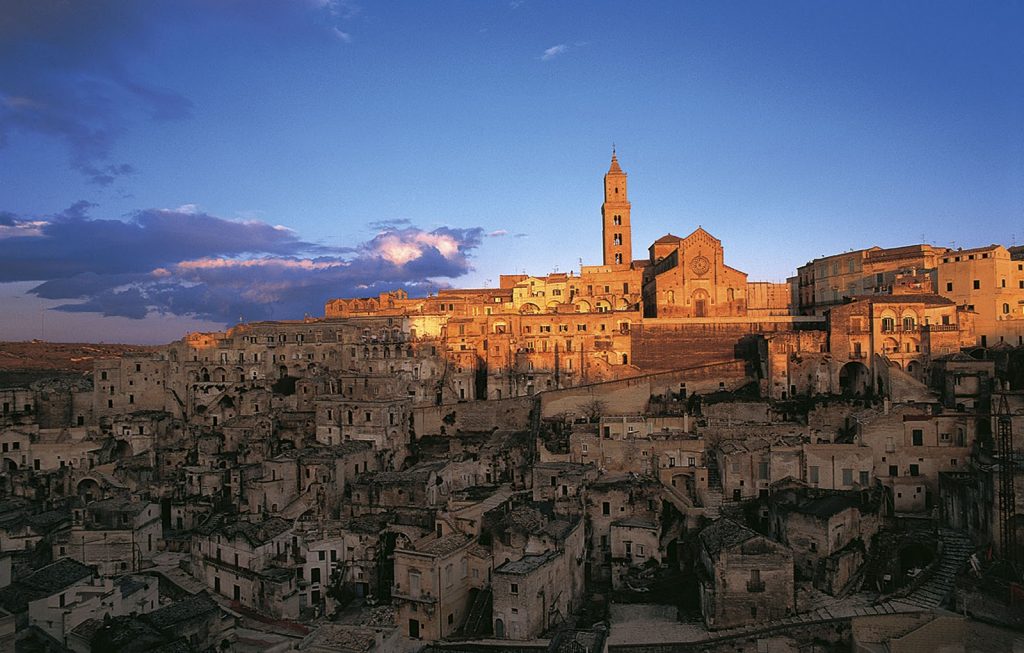 Matera is known as “the city of stones”, for the peculiarity and unicity of its city center. Excavated and built close to the Gravina of Matera, a deep gorge that divides the land in two parts, the stone of Matera, district that builds the antique part of the city, have been recognized by the UNESCO as a Heritage of Humanity and first place on southern Italy to receive such an award.
We will visit the beautiful Gallipoli, a well-known town on the sea, Grottaglie, the ceramic capital of southern Italy and many others will be part of our unforgettable way to Matera. 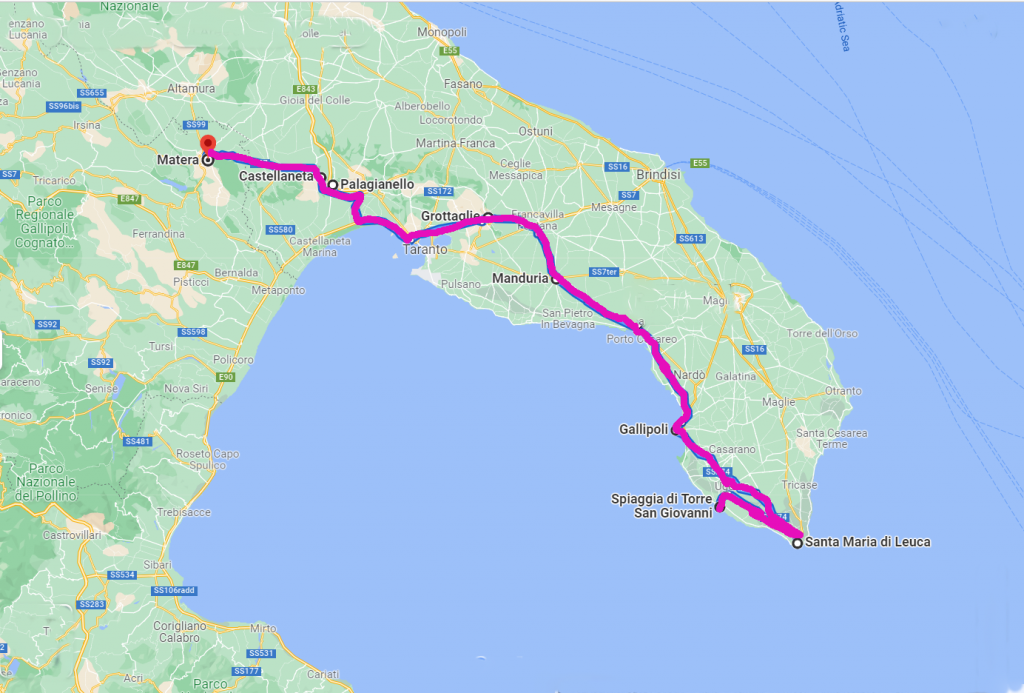 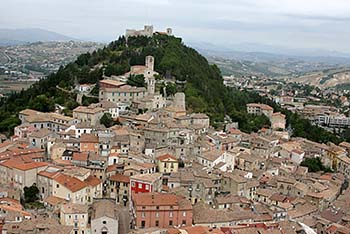 Campobasso is in southern Italy and is the capital city of Molise. The town is made by an antique part of medieval origins, full of historic and artistic values, located on a hill dominated by the Monforte Castle that marks the city center. The old town is arranged on a semicircle on the slope of the Castle, numerous are the portals whit decorations, noble family badges and allegorical figures. The modern city has been projected based on the ideal of city of garden having a lot ofgreen spaces, squares and fountains from which flows pure and fresh water and is the home of the “Infiorata”, an event where local flowers are used to create colorful carpets in the streets in celebration of the Corpus Domini, held in the last week of May. 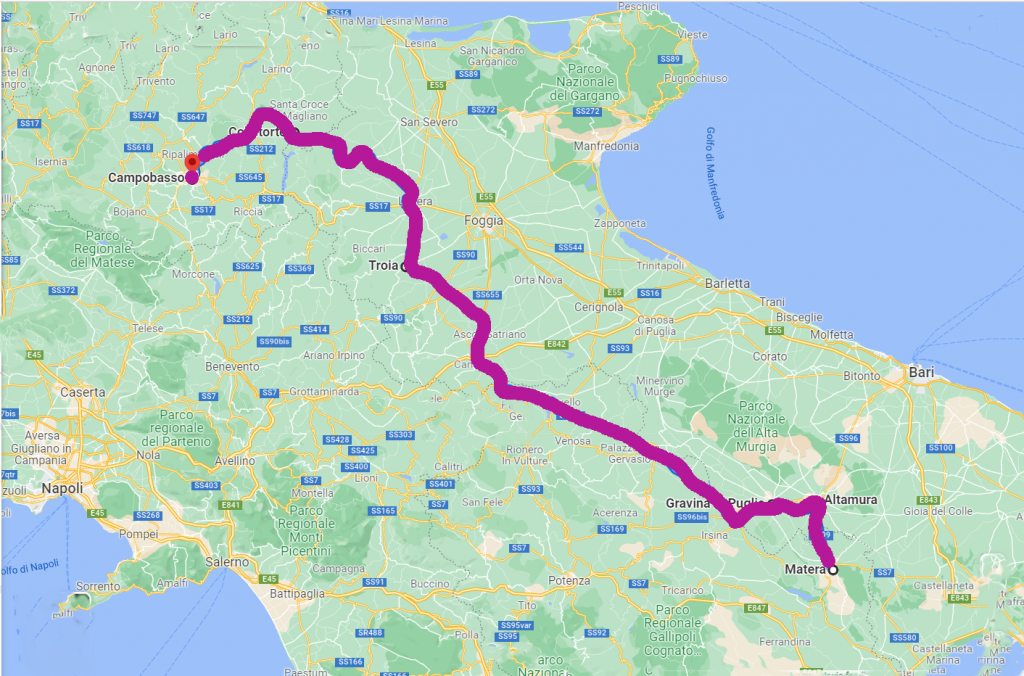 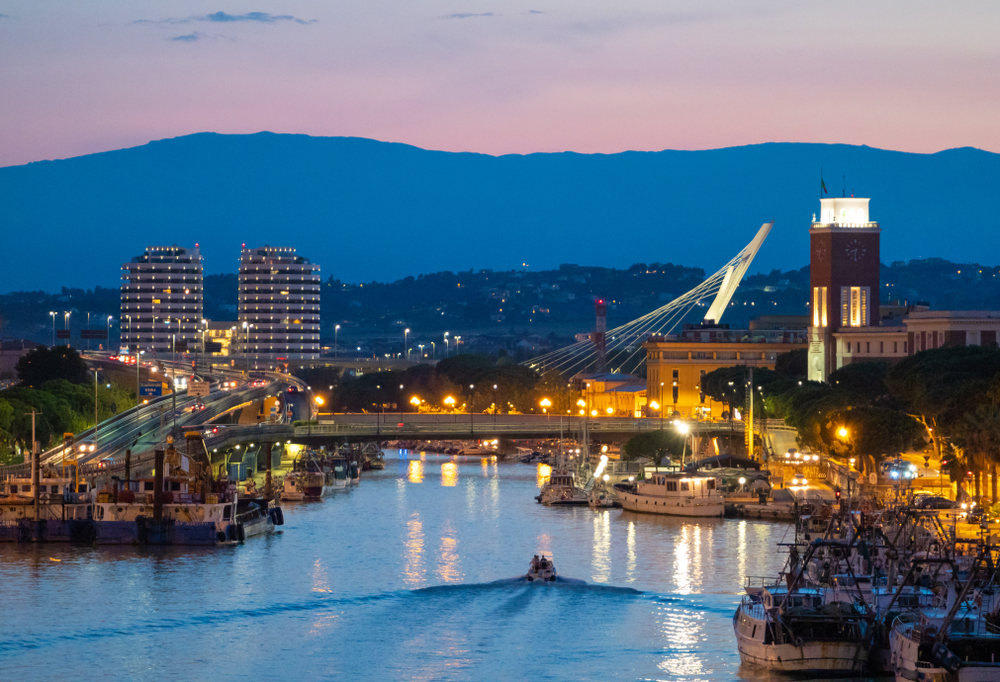 Campobasso will mark the starting point of the last stage of the Autogiro d’ Italia 2022 which will lead us to Pescara. To reach the shores of the Adriatic Sea, we will be passing through Agnone, worldwide known because of the most antique bell-making establishment in the world and the only to make allowed to use the pontifical seal. We will pass through the wonderful Passo San Leonardo on central Apennine, located on Abruzzo, on the occidental part of the Maiella Mountain and the thermae of the Caramanico, known thermal center inside of the Majella Park, and many other fascinating locations of the spine of Italy.
Pescara will welcome us after having done 1.679 KM of wonderful streets, seen unforgettable views and created memories that will last forever in our hearts. 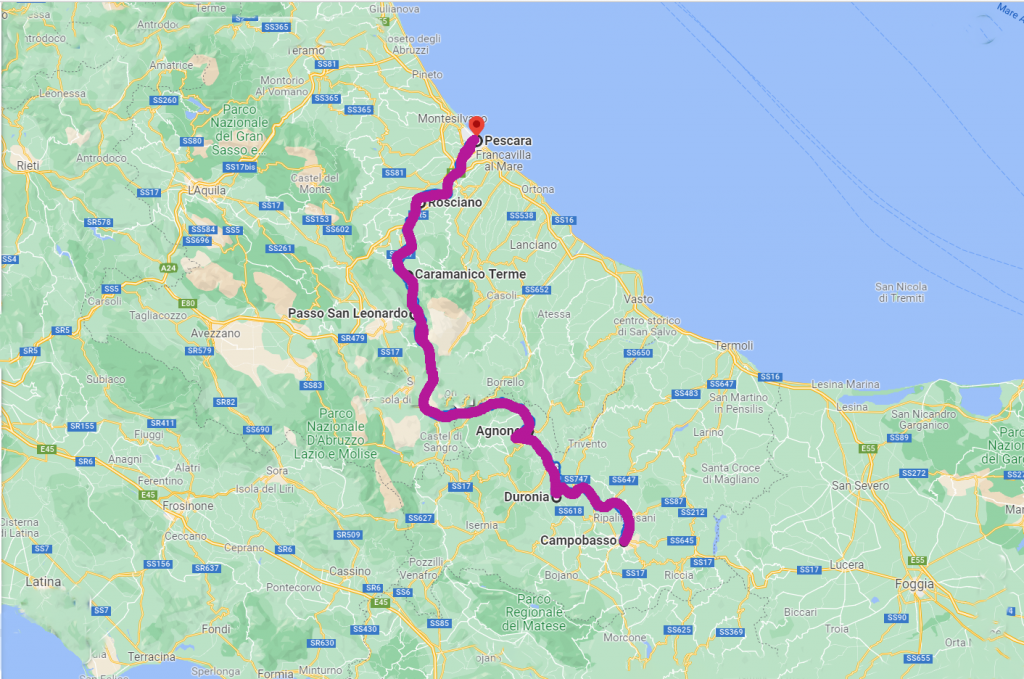